I got out of bed at 4:30 a.m. this morning….on purpose.  Andrew had a date with a 20 gauge shotgun, some ducks, and a group of hunters/mentors at Lake Arrowhead State Park.  His ride was coming at 5:15.

Amazingly, he got up without much coaxing on my part, much better than whenever he is going to school.  I made a parental decision that just one day missed of school was worth it for this opportunity.  And here’s why:

Yesterday, my older son & I had the time of our lives.  We suited up in camo, had all the correct licenses, stamps, and permits, and went on a mentored duck hunt.  He was the only youth in attendance, I was only one of three female hunters.  Texas Parks and Wildlife Department has partnered with Delta Waterfowl and the Texas State Rifle Association to conduct these mentored hunts; it’s a relatively new endeavor, this hunt being only the 3rd in the state.

For the orientation,  I was the only female.  Walking into a room of hunters, men I don’t know, I really don’t know what to expect.  But being married to a life-long hunter, I recognize the qualities of these guys as I step into the room.  I am greeted warmly.  There’s lots of laughing, chuckling, swapping of stories.  Every one in attendance made Andrew feel special and welcomed.  Several know of Mark, and a couple even know me.

Andrew and I head out to the blind with Sarah, our friend, and our two hunter mentors, Chad and Travis.  Chad’s 15 month old chocolate lab, Izzy, accompanies us.  It’s a beautiful afternoon, but we are dressed for the weather change that should sweep through the area around 4pm.  It’s a slow start, we don’t see any ducks up close and personal.  Like clockwork, at 4:10 pm, the clouds roll in, and the wind shifts to the north.  Andrew, who is loving all of this, is happy I forced him to wear his long johns 🙂

Since the blind’s not seeing any action, we hop into Chad’s truck and head over to a small pond, in hopes of a surprise attack.  I wish you could’ve seen Andrew, sneaking along in front of me, Travis at his side, giving him advice and positive reinforcement.  We line up, the 5 of us, as we get ready to stand and blast away.  On the count of 3, we stand.  Four ducks are on the pond, we start shooting as they scatter.  Andrew has two shells in his pump shotgun, but he only requires one.  He hits a female gadwall duck, winging it.  It drops, not too far away, dead.  His look?  Incredulous.  Man, I wish I’d swapped my gun for the camcorder before leaving the truck!

Another duck is shot, and we go to retrieve them.  Andrew has a carrier,  both ducks are put into it, and we head back.  There are fist bumps, and once back at the truck, lots of photos taken.  He’s hooked.  TPWD and partners, you succeeded in getting my 10 year old son to groove on hunting.  You can look at his face and see a lifetime of hunting in his future.  I had a great time, too, and the fun we had together, the two of us, is priceless.

As we return to the meeting hall, every hunter we meet is genuinely excited for Andrew.  They gather around a table outside, as Andrew & Travis take the birds out of the carriers.  Travis shows A.J. how to dress his bird.  I snap away, as I see my son, next to his mentor, surrounded by a dozen or so men.  And this unlikely scripture flashes through my mind:

“Remember to welcome strangers, because some who have done this have welcomed angels without knowing it.”  Hebrews 13:2
Now, those men might take exception to the notion that I am considering them angels, but they really are.  Every one of them is there, volunteering their time to help inexperienced hunters, like Andrew and myself, learn the basics of their beloved sport.  And although they definitely don’t look “the part,” as they stand there in various patterns of camouflage, with muddy boots and ruddy faces from the cold, they look like angels to me.  They are teaching Andrew things that his daddy would be teaching him, standing in for him, in a way.  And I will be forever grateful.

But back to this early morning.  Originally, we had planned on hunting only this afternoon.  That was before Andrew got a taste of unloading that shot on the duck.  He begged me.  He used those beautiful blue eyes and long blonde eyelashes.  So, I gave in.  I mean, how many times will he get the opportunity to spend time with a group of men like this?  I hope there’s many of them in our future, but we have learned the hard way this past year not to take anything for granted, and to “go for the gusto” when we get the chance. 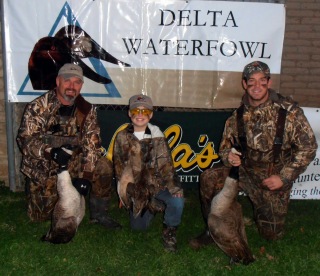 That’s why my kid is hunting, even as I blog, with Travis, Chad, and Sarah.  Schoolwork can wait, just this one time.  I will join them this afternoon.
Last night, as we were driving home from the park, Andrew told me the day was one of the best of his life.  My heart swelled, and the tears came.  I’m betting my nice clothes and high heeled shoes will start taking a backseat to my new waterproof boots & camo wear.  And I don’t mind in the least.
***5 minutes after posting this, I get a text message with a photo…Andrew’s got a goose!***
(I don’t know how to cook a goose!?!)