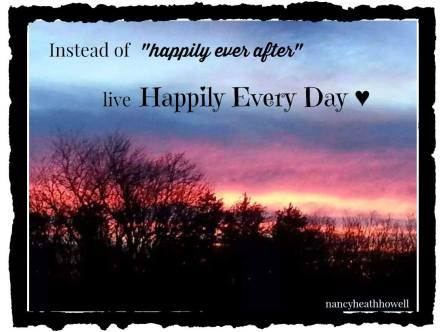 The reality is you have no idea where your life will take you tomorrow. You are like a mist that appears one moment and then vanishes another.

“And they lived happily ever after… The End.”

How many times have you seen the above words, either at the close of a fairy tale or the end of a movie?

How many times have you, as a parent, read a story to your children that concluded in this manner?

Attention, people of Earth:  There is no such thing as “happily ever after” this side of Heaven.

It’s a crock, a pie-in-the-sky term which plays to our romantic side and wistful daydreaming.

No one, no matter how lovely the life or the relationship or the family, lives happily ever after.  “Happily ever after” gives a false sense of security, a technicolor existence that can never live up to those three words.

“Ever afters” eventually come to an end.

And endings are not pretty, at least the ones I’ve experienced in my life.

Endings are messy.  The majority are not wanted by at least one of the parties involved.

Endings may evoke sadness, helplessness, hopelessness, and anger.  They may cause great pain.  Lives are forever changed by endings.

Death is the ending feared most by the human race.  But let’s face it by taking the bull by the horns.   We’re going to die some day.  As James so eloquently puts it, we’re like a mist, a vapor–here today, gone tomorrow.

Endings are inevitable.  We cannot get around them.

Embrace that reality.  Incorporate it into your daily living.

The sooner that simple fact sinks in to our sometimes-thick skulls, the sooner we can go about the business of living “happily every day.”

Whether you like it or not, at some point in your life (or at many points in your life), an ending you’re not prepared for will occur.

Your “happily ever after” stops.

The best way to deal with the reality of endings is to live fully in the moment.

Then when “the end” comes, you can face it with no regrets.

One thought on ““Happily ever after??””